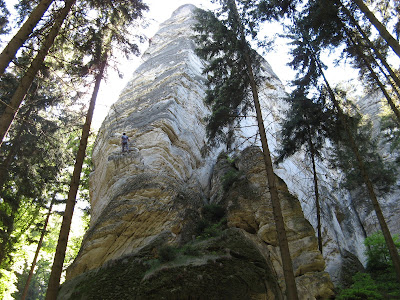 The Czech Paradise (Český Raj) is a region to the north-east of Prague which features unusual sandstone rock formations among its dense forests. Many castles are scattered among these 'rock towns', as well as small villages full of traditional wooden folk architecture. There are at least five different interesting routes for hiking in the Czech Paradise that can be made as day trips from Prague with public transport. 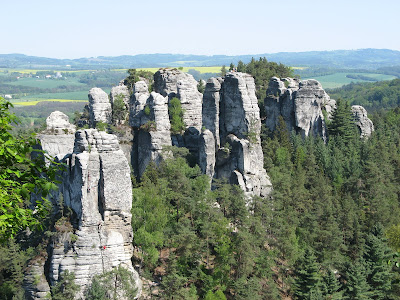 One of the best choices is a hike that includes the ruin of Trosky castle, Hrubá Skála rock town and Valdštejn castle. From Prague's central station take the train to Turnov and then change to a local train which goes east to the village of Ktová (the total travel time from Prague is about 2 hours and 20 minutes). A green-marked trail starts from the train station in Ktová which leads straight up to Trosky castle. After visiting the castle you can follow the red-marked trail north to Hrubá Skála chateau and then into the rock city area on the yellow trail until you reach the ruins of Valdštejn castle. This is a nice place to take a rest, since there is a small restaurant with drinks and food available in front of the castle entrance. From there it's an easy downhill walk into the town of Turnov on the red trail, where you can take a train back to Prague. 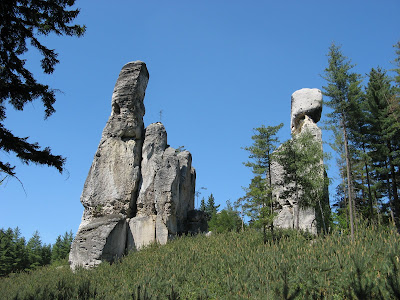 The most impressive castle in the Český Raj region is Kost castle, to the south of the Hrubá Skála area. It's possible to include a visit to this castle in a nice day hike starting from the small town of Sobotka, which has an interesting chateau called Humprecht on a nearby hill and some examples of traditional wooden folk architecture. The most convenient way to get to Sobotka is by bus from outside Prague's Černý Most metro station, it takes about one hour and ten minutes. A red-marked trail from Sobotka leads to Kost castle along a picturesque river valley. It's also worth making a detour to the nearby village of Vesec u Sobotky which has some beautiful wooden folk cottages. 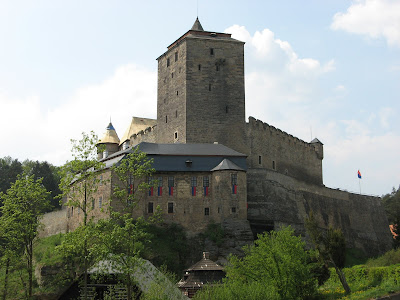 One of the highlights of the Czech Paradise is Prachovské Skály rock town, near the town of Jičín (which is a much more interesting and historical town than Turnov). To get there take the bus to Jičín from outside Prague Černý Most metro station, then get a local bus from the bus station in Jičín to the bus stop called Holín Skalní Město which is at the edge of the rock city. The main valley where the rock city is located is small, but a web of trails go over, under and through the rock formations and it's worth spending a full afternoon exploring them. Suché Skály rock town is found near the pretty little town of Malá Skála, which makes a nice destination together with the nearby Frýdštejn castle ruin. To get there take the train from Prague's main station to the town of Turnov, then change to a local train to get to Malá Skála. A red-marked path leads up the hill to the Suché Skály formations. On the opposite side of the river from Malá Skála the castle of Frýdštejn sits on top of a rocky pillar. The red-marked path leads along the river to the south from there, offering great views back towards the castle. 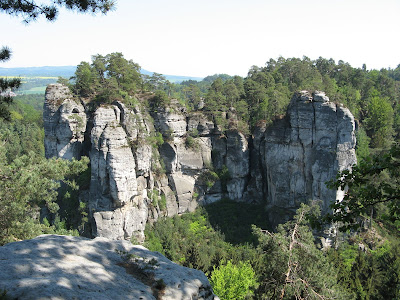 Another option to try is the Přihrazké Skály rock town with its impressive Valečov castle ruin. To get there take the train from Prague's main station to the town of Mnichovo Hradiště and then walk east along the red trail to reach the rock town. There are two other smaller castle ruins among the rocks to the north of Valečov along the red-marked trail, while the finest formations in the rock town are further east along the blue trail. 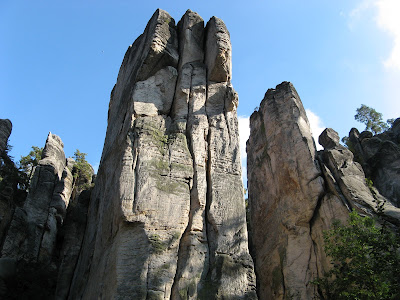 These are a few interesting options, but there are many more worthwhile hikes to make in the Czech Paradise and public transport connections from Prague are generally good, at least to the towns in the region. Many shops in Prague sell hiking maps of the Czech Paradise region which show the trail routes and distances. If you want to check any bus or train times in the Czech Republic or Slovakia, use the website www.vlak-bus.cz (you can change the language to English in the lower-right corner of the page). 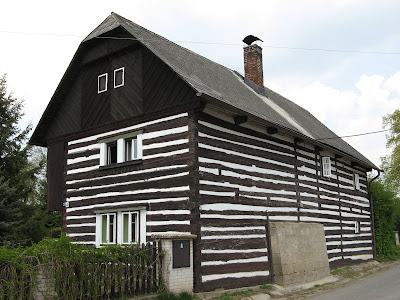 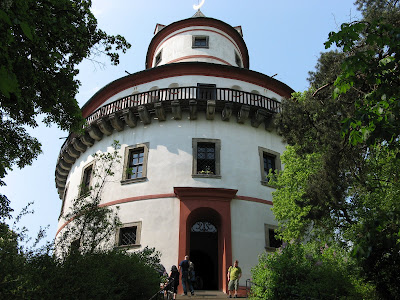 Posted by Goulash Train at 3:42 PM