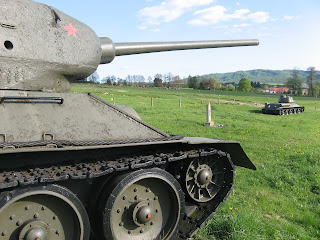 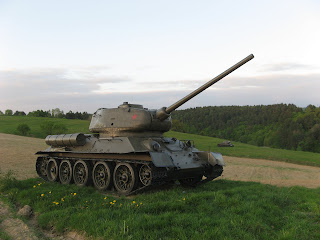 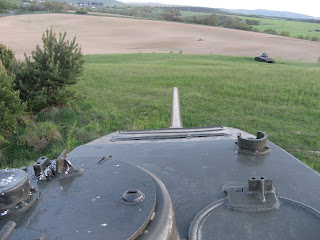 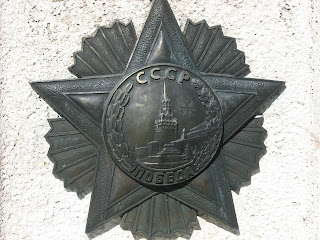 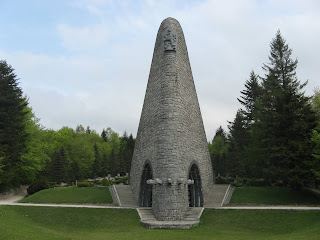 The fight for the Dukla pass on the border between Slovakia and Poland was a major battle of the Eastern Front in the Second World War. German resistance was stonger than anticipated, and the advance of the Russian and Czechoslovak forces was held up for many months with over 70,000 casualties on both sides. Following the end of the war and the establishment of a communist government in Czechoslovakia in 1948, it was decided that the liberation of the country by the Red Army should be commemorated with the greatest possible fanfare. Cities and towns across the country erected statues and monuments to the Russian liberators, usually inscribed with the date that the settlement was freed from German forces. The Dukla pass was particularly important as the spearhead of the advance into Czechoslovak territory, and hence an enormous monument was erected there to honour the bravery of both Russian and Czechoslovak troops. A valley near the pass which saw intense fighting during the conflict became known as the "valley of death", and many abandoned military vehicles and tanks remained there following the battle. Many Russian tanks in the valley were restored to their original condition and then returned to the position where they had been found in the valley, some sitting frozen in the middle of advancing through a farmer's cornfield, others appearing to emerge from the forest to press the German defenses. Around a dozen Russian tanks remain spread through the fields and forests in the region today as memorials to the Russian liberators. At the peak of the Dukla pass on the Slovak-Polish border sits a lookout tower intended to allow visitors to view the full extent of the battlefield area. The nearby town of Svidník was almost totally destroyed in the battle, and today another large war memorial to the Soviet troops is a dominant feature of the town's layout.

The Dukla pass is easily reached by one of several daily buses to and from Svidník; Svidník is most easily reached by bus connection from Prešov or Bardejov. In Svidník, the Hotel Rubin is an inexpensive and reasonably comfortable place to stay.
Posted by Goulash Train at 1:23 PM