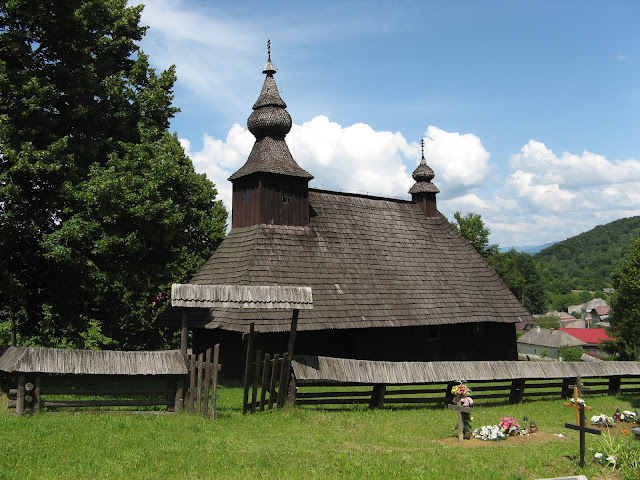 This small Greek Catholic church lies on a hill above the village of Hrabová Roztoka in eastern Slovakia, just a few kilometres from the border with Ukraine. The church was built in the middle of the 18th century and dedicated to Saint Basil the Great. A sign on the rear wall of the church declares it to be a 'national cultural monument' of Slovakia (this type of metal sign is affixed to most of Slovakia's wooden churches), but interestingly a second sign declares it to be 'Ukrainian national architecture' written in the Ukrainian Cyrillic alphabet. 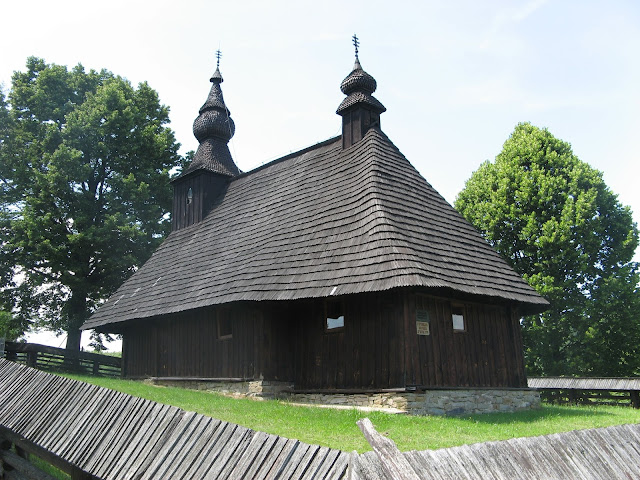 The church has a simple, rustic design which is similar to the nearby church in the village of Ruská Bystrá. It follows a three-room plan with a nave, sanctuary and 'babinec' or entrance room, while above there are two towers with onion domes topped by three-barred iron crosses. In the front tower there are three bells which date from 1796. The roof and exterior walls underwent repairs and replacement of wooden tiles in the year 2000. 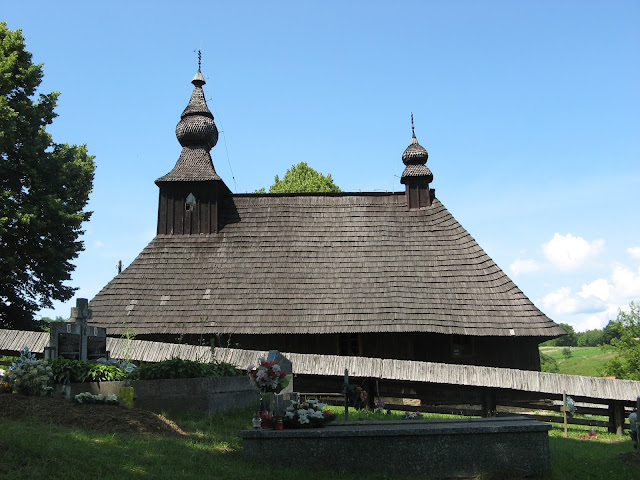 The impressive iconostasis in the interior dates from 1794 and is almost as old as the church itself. A rare feature of this church among those in Slovakia is the Czar door, in place of the usual 'Tree of Jesse' doors. In the second row of the iconostasis the image of the Last Supper is in the central position, instead of the more common image of Christ. Five icons were stolen from the church in 2003; they were later recovered, but were damaged and required restoration. 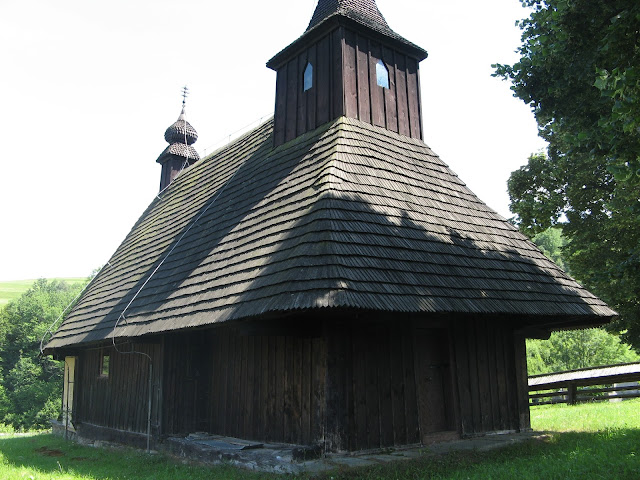 Kalná Roztoka can be reached by infrequent buses from the towns of Snina and Stakčín to the north, while the neighbouring village of Ruská Bystrá has bus services connecting it to the town of Sobrance to the south. Therefore it is possible to see both Ruská Bystrá and Kalná Roztoka in a day by walking along the forest trail between them and arriving and departing from each by bus. The church key keeper lives down the hill in the centre of the village, but they weren't at home when I visited. 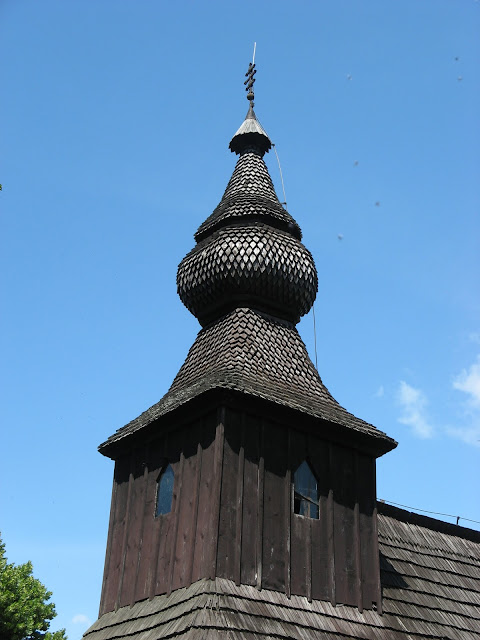 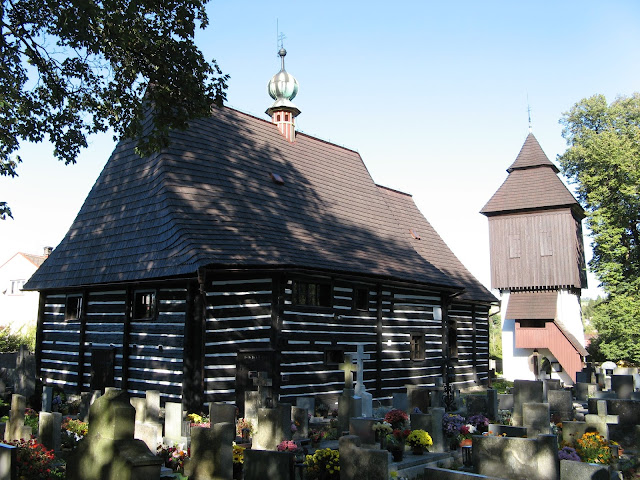 This Roman Catholic wooden church sits on a small hill at the edge of the village of Slavoňov in the East Bohemia region of the Czech Republic. The church was built in 1553 on the site of a much older structure. It was originally founded by Utraquists (a moderate branch of the Hussite movement) and dedicated to Saint Martin, but the church became Roman Catholic in 1683. 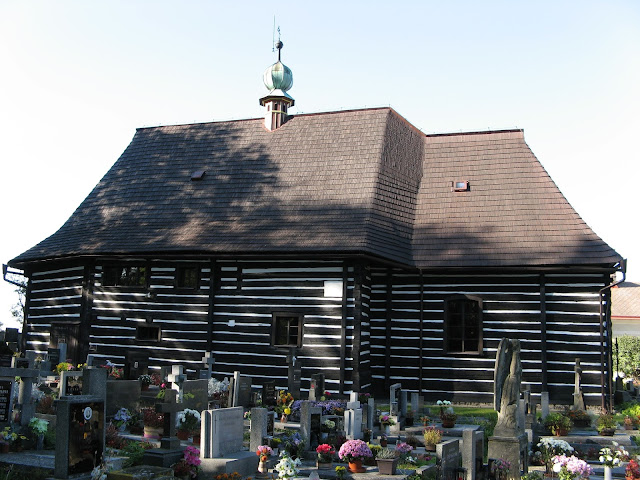 The large bell tower within the church yard dates from the same era as the church, probably built in 1555. The lower half of the tower is made of brick and its height suggests it was also intended to have a defensive military function in the event of the village coming under attack. Three bells cast in the seventeenth and eighteenth centuries hang in the tower. 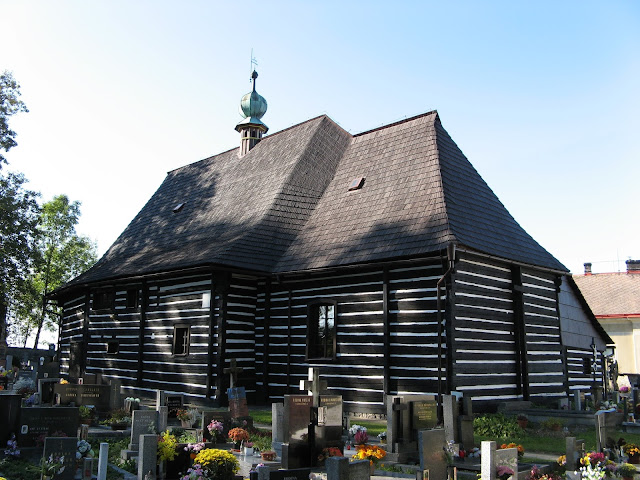 The beams of the church are made of oak, spruce and fir logs. The joints between the logs were filled in with mortar and then the exterior of the building was covered in whitewash. The interior walls and ceiling are painted with murals of plants and flowers which date from the sixteenth to eighteenth centuries. The murals were restored twice in the twentieth century. 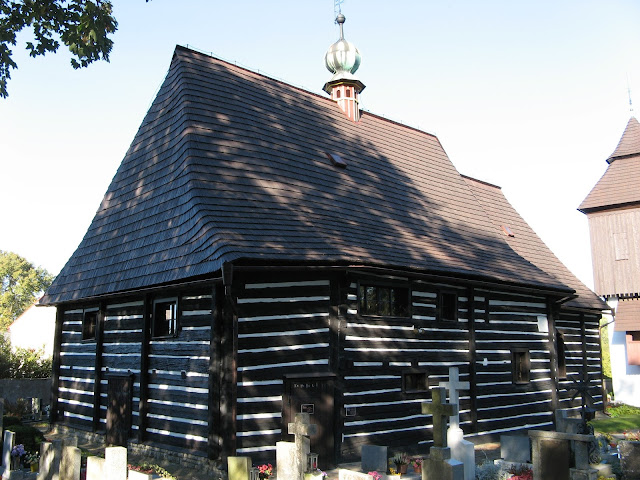 Getting to Slavoňov is possible by public transport since there are several buses daily from the nearby town of Nové Město nad Metují which has train and bus links to most major cities across the country. The village is just 4 kilometres east of Nové Město nad Metují so it is also possible to walk there along a forest trail. The church is open for religious services four times per week, and at other times the door into the front entrance room is left open where it is possible to get an obstructed view of the church interior. 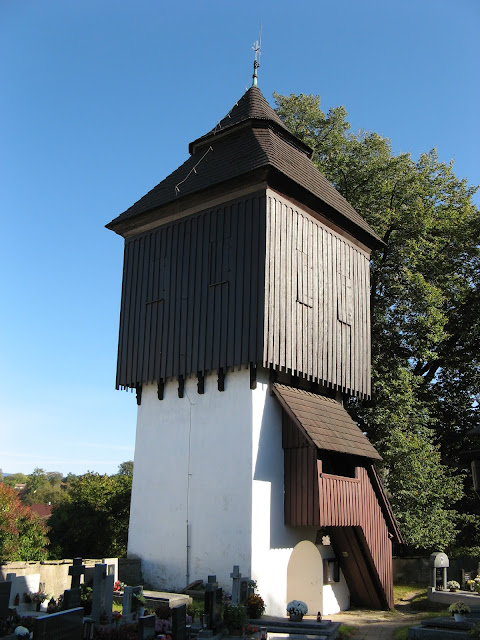 Posted by Goulash Train at 6:33 AM No comments: Links to this post