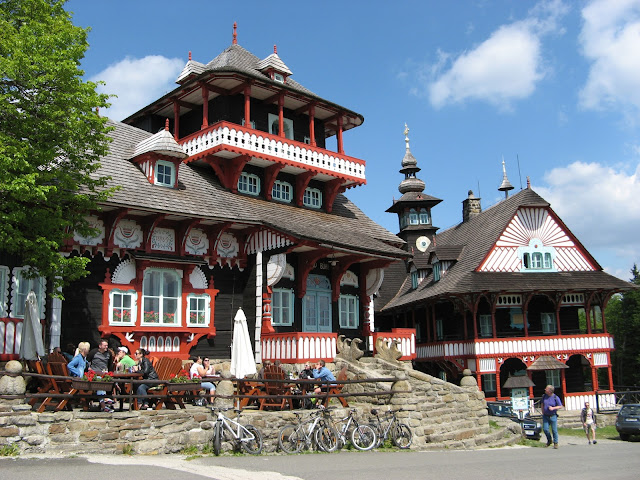 Pustevny is a hilltop ensemble of gingerbread-style folk buildings in the Valašsko region of the Czech Republic close to the border with Slovakia. The surrounding Beskyd mountains are popular with hikers in the summer and skiers in the winter, and there is a chairlift in operation to carry visitors up the mountain to the village. 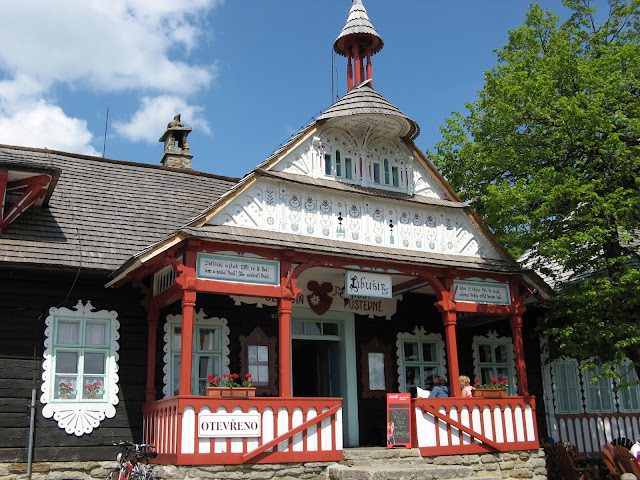 The buildings were designed by Slovak architect Dušan Jurkovič and constructed together with local Moravian master builder Michal Urbánek in the 1890's, drawing upon traditional Slavic folk art and building styles of the Valašsko region and the Carpathian Mountains. The final appearance of the buidlings also incorporates elements of the Art Nouveau style which was prominent at that time. Construction began in 1897 and was completed in 1899. Jurkovič also designed several other wooden buildings with a classical Slavic folk style in the present-day Czech Republic, such as the spa buildings in Luhačovice or the covered bridge in the castle gardens in Nové Město nad Metují. 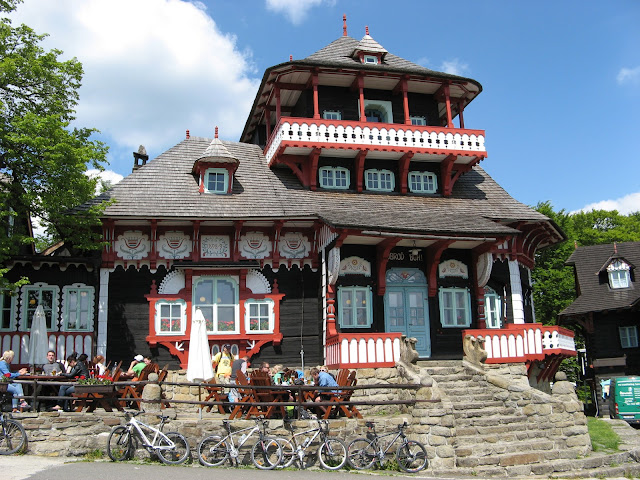 The two most famous buildings in Pustevny are named Libušín and Maměnka, and they sit side by side together on top of the hill. Maměnka houses accommodation and has a wooden interior decorated in a similar style to the exterior, with traditional expressions and sayings painted on the walls. 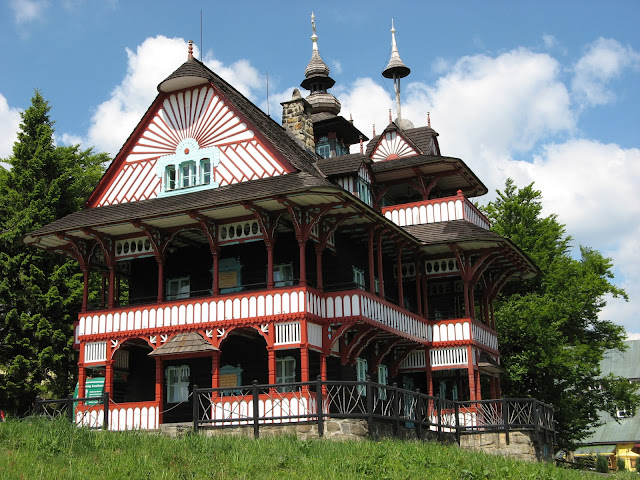 Libušín is a restaurant serving traditional Wallachian and Moravian dishes. The name of Libušín comes from the legendary Czech princess Libuše. The interior of Libušín is decorated with beautiful frescoes designed by Mikoláš Aleš based on Wallach and Slovak folk legends. Art Nouveau-style chandeliers add a further touch of elegance to the dining room. 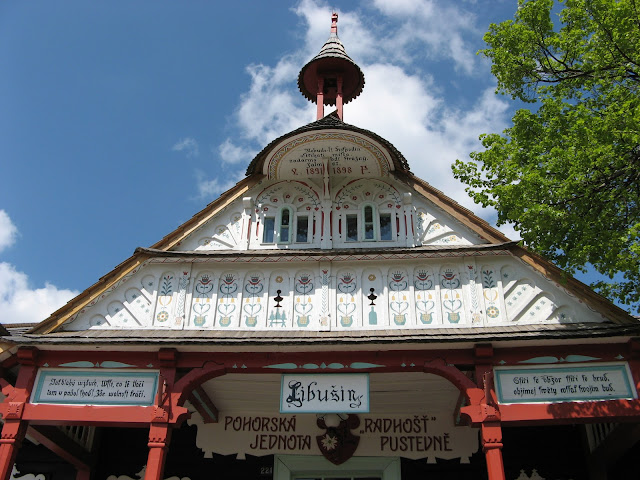 Another famous feature of the architectural collection at Pustevny is a small bell tower which stands near the trail head for the climb to the top of Radhošť mountain. The tower was designed by Jurkovič in the same distinctive Wallachian style as the other buildings and is a valuable example of Slavic folk art. 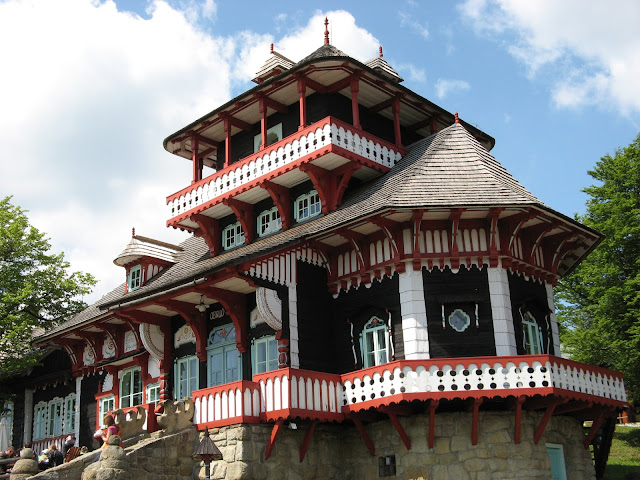 Further up the hill towards the summit of Radhošť there is a stone statue of the Slavic pagan god Radegast, while at the highest point there is a wooden chapel dedicated to Saints Cyril and Methodius, the patron saints of Moravia. Several festivals and special events take place in Pustevny each year, with the Snow Sculpture competition held in January among the most popular. 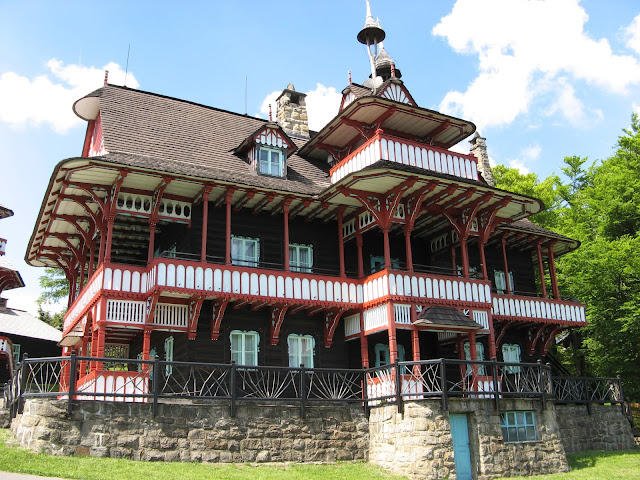 On 3 March 2014 a large fire in Pustevny caused extensive damage to the folk cottage called Libušín. The open air museum in Rožnov pod Radhoštěm declared that it was committed to rebuilding Libušín as faithfully as possible according to the original design. This project was expected to cost tens of millions of Czech Crowns and a fund for public donations was established. Benefit concerts were also held to get the funding campaign started. 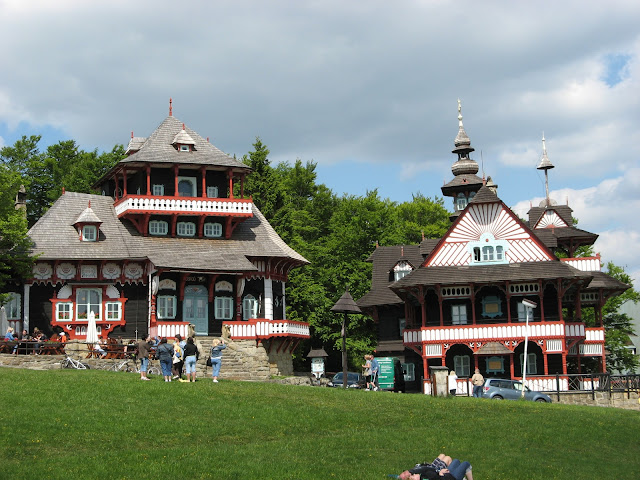 There are several ways to get to Pustevny depending on the direction you approach it from. A road up the mountain from the southern side ends with a parking area just below Pustevny, and several buses per day run to the village from the nearby town and regional tourist hub of Rožnov pod Radhoštěm. Hiking trails also lead from the eastern end of Rožnov pod Radhoštěm to the summit of Radhošť mountain and onwards to Pustevny. For those who prefer a relaxed trip to the top there is a chairlift in operation in both winter and summer which connects Pustevny with the village of Trojanovice at the base of the mountain on the north side. 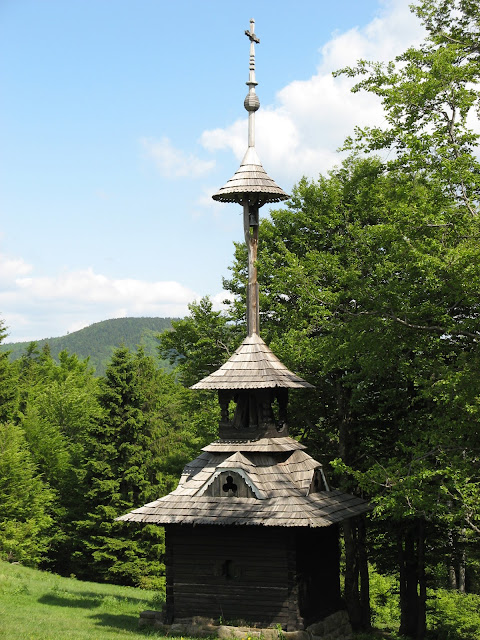