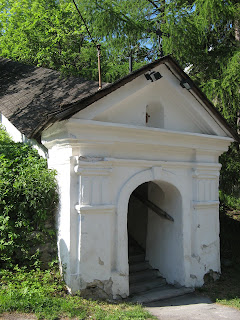 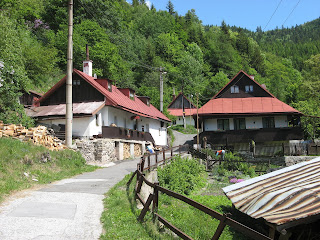 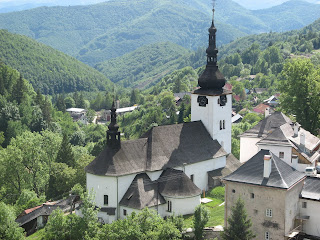 The small historic village of Špania Dolina lies in a valley surrounded by forested hills and mountains a few kilometres from the central Slovak city of Banská Bystrica. Much of the town's character as a centre of medieval copper and silver mining has been carefully retained, with many impressive stone miners' houses dating from the 17th century. Several entrances to the mines have been preserved, including one with a small chapel where the miners would have stopped to pray for a safe working day before they descended down into the depths gripping a candle.
A special form of bell tower was used to call the miners to work each morning - a large flat piece of wood called a 'knocker' was struck with hammers to produce a loud sound that could be heard echoing throughout the village. This wooden bell tower has been restored to its original 16th century appearance.
A fortified gothic church dominates the centre of the settlement, perched on a hill with a steep covered staircase running up to it from the main square below. The church contains several frescoes and mural paintings which depict miners at work; this is a feature that is common in churches found in mining settlements from this period - the main churches in Rožňava, Slovakia, and in Kutná Hora, Czech Republic, also feature such mining images dedicated to the patron saint of miners, Saint Barbara.
The mines were closed in 1888 when the major copper and silver deposits ran out, but the village has tightly held onto its heritage and today is a popular outdoor tourism destination for Slovaks and Czechs. Wonderful hiking opportunities abound in the mountains that surround the village in all directions. It is also possible to rent a few of the historic cottages in order to spend the night in this atmospheric place. A particularly memorable experience is to climb the hilltop above the church just before dusk to enjoy the panoramic view. There is also a rustic village pub full of local characters to enjoy a beer in later on in the evening.
Posted by Goulash Train at 1:04 PM