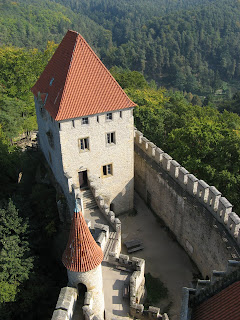 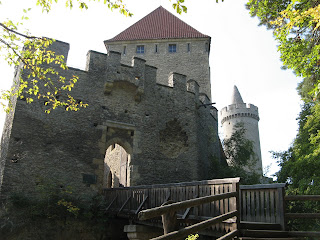 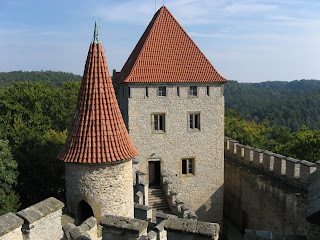 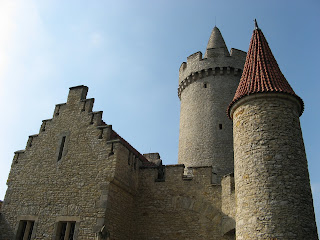 This gothic castle is located 60km north of Prague in a region called Kokořínsko, an area of thickly wooded hills and valleys featuring sandstone cliffs and strangely-shaped rock formations. The region is a popular place for hiking, as many marked trails wind through the dense forests. The castle sits on a steep rocky outcrop overlooking the green valley below. The earliest mention of the structure is from 1320, when a fortress carved out of the surrounding sandstone was constructed. By the 16th century the castle was in poor condition, and was placed on a list of structures that were not to be maintained by the Czech state. Legends describe how the castle was then occupied by robbers and bandits such as Petrovsky of Petrovice who used it as a base from which to terrorize and pillage the region. In the 19th century the castle was left in ruins, but its isolated location and gloomy atmosphere brought it to the attention of a generation of Czech Romantic poets and painters such as K.H. Macha and Josef Manes, for whom the fortress was a source of great inspiration. The castle was purchased in 1895 and reconstructed over the next two decades by Václav Špaček, who wanted to make the structure into a family memorial. This refurbishment marked the first time a castle in the Czech lands was restored to its historical appearance. Today the castle has been returned to the ownership of the Špaček family, who intend to keep it open to the public as a museum.

A guided tour will take you through the exhibits of the interior, and it is also possible to buy a ticket to climb the tower and battlements. The second option is a more rewarding choice as the exhibits on display are less memorable than the views from the castle walls.

The best way to reach Kokořín from Prague using public transport is to take a bus from Praha-Holesovice station to the town of Mělník (which is worth spending time in as well), and then changing to another bus to the village of Kokořín. The bus will drop you in the centre of the village, and from there the castle is 1.5 kilometres further along the road and then down a forest path.
Posted by Goulash Train at 1:33 PM