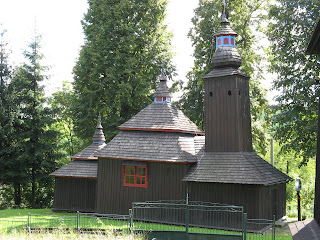 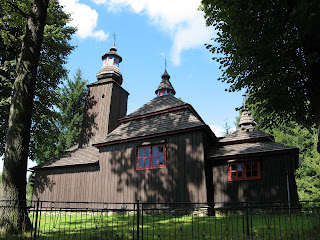 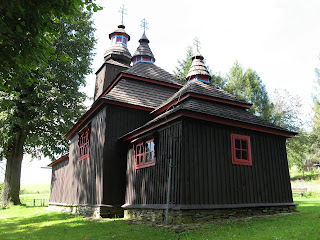 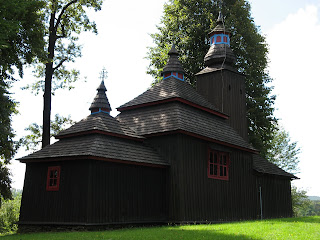 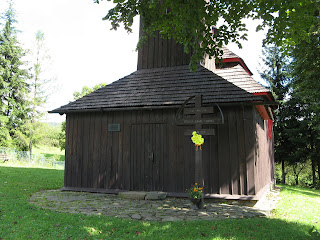 This pretty little church is found on a small wooded hill above the village of Šemetkovce in the Svidník region of eastern Slovakia. It is a Greek-Catholic church named for St. Michael the Archangel, and dates from the year 1752. Like most wooden churches in the region, the structure was built without the use of metal nails using an ingenious woodcut pattern with wooden pegs inserted at the end of each log to hold the beams in place. Another typical feature of Greek-Catholic churches which is found in the Šemetkovce church is the emphasis placed on the number three, symbolising the Holy Trinity. Three domes, three crosses, three rooms in the interior and three doors leading below the iconostasis are all typical features. The three domes rise in height from east to west, with the doorway facing west, also a typical feature of Greek-Catholic design. The iconostasis is of baroque style, designed in the late 18th century, while some of the icons date from the 17th century. The church was badly damaged in World War Two, and extensive reconstruction work was undertaken in 1969 and 1970, and further renovations were necessary in 2001. Standing next to the church there is a tall wooden belfry with bells that are rung daily. The church and belfry were originally surrounded by a log fence, though today there is a more modern metal fence.

The village of Šemetkovce is set in lovely hilly scenery and has a few old-fashioned folk cottages along its laneways. The village can be reached by bus from Svidník just a few times a day from Monday to Friday, and there are no buses on Saturday or Sunday. Another option if you are without your own vehicle is to take the bus from Svidník to Ladomirová (be sure to stop and see the wooden church in that village as well) and then try to hitch-hike the last seven kilometres to Šemetkovce. That's how I did it when I visited, there were no problems getting a lift from some of the locals since the roads are small and everybody knows everybody else in this region.
There are hiking trails which connect together many of the villages with wooden churches in the Svidník region, and it is possible to hike from Šemetkovce across to Kožuchovce village, close to Miroľa village with its wonderful wooden church.
Posted by Goulash Train at 1:53 PM