Quirky and Unusual Sights # 2 - The Minaret in Lednice, Czech Republic 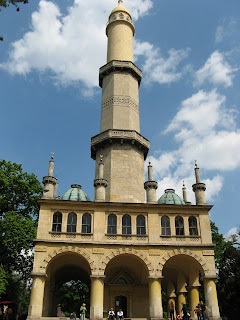 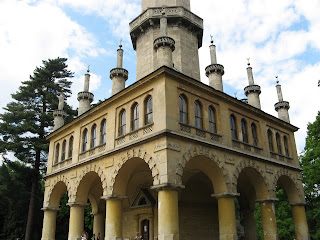 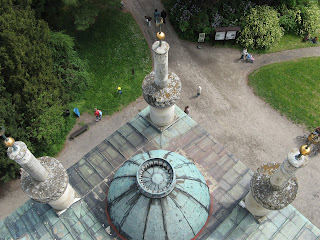 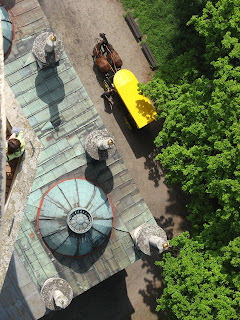 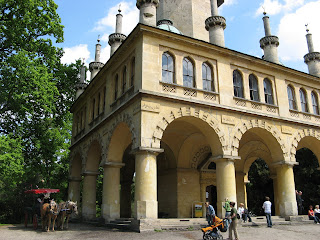 The Lednice-Valtice region was once the family home of the Lichtensteins, who began developing the complex in the 18th century. Many pavilions, fountains, statues, arches and castle ruins can be found spread over an area of several hundred square kilometres. In the 19th century the complex was further developed with many structures built between the family's palaces in the towns of Lednice and Valtice. The palace in Lednice is surrounded by a huge landscaped garden, the most unique and outlandish feature of which is the minaret, built in a Moorish-revival style in 1802. At 60 metres high, it was supposedly the tallest minaret outside the Muslim world at the time of its construction. In the early 19th century it was very popular for the European aristocracy to embrace exotic foreign cultures and artistic forms by having palace rooms decorated in Chinese, Japanese or Middle Eastern styles. One story of the minaret's construction claims that Prince Alois Lichtenstein had planned to construct a church in the town of Lednice, but his proposal was rejected by the local municipality. As an act of cheeky defiance, he ordered the construction of the minaret as a substitute. Its construction was led by the architect Hardmuth, who had a difficult task given the extremely swampy ground the structure is built on. This was overcome by driving wooden piles deep into the soil to act as a foundation. The minaret has a wide base structure with turrets and arcades lining the roof, all topped with a crescent moon symbol. The exterior of the lower floor is decorated with textual inscriptions from the Koran written in Arabic script. The lower floor contains eight rooms with Moorish designs painted on the walls. The main tower provides views over the Lednice castle gardens and as far south as Valtice and the Austrian border. Today it is used as a lookout tower and is a popular attraction for visitors to the Lednice palace.

The Lednice-Valtice area is a possible daytrip from Brno, Bratislava or Vienna. Local trains connect it to the nearby town of Břeclav, which is a major rail hub with regular trains to all the surrounding cities and international capitals. The Lednice-Valtice area can also be explored while staying in Mikulov, which is a lovely Czech town a few kilometres west of the region.
Posted by Goulash Train at 1:58 PM