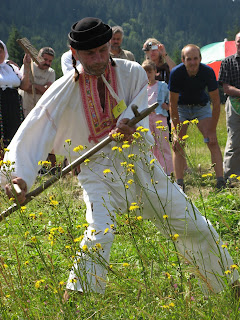 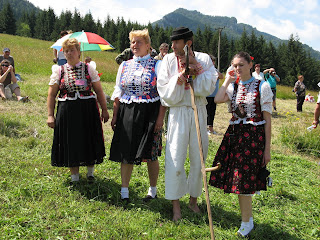 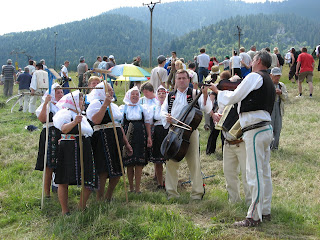 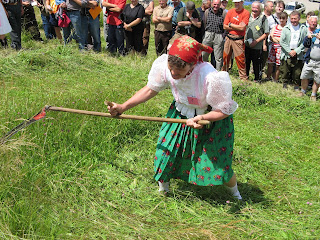 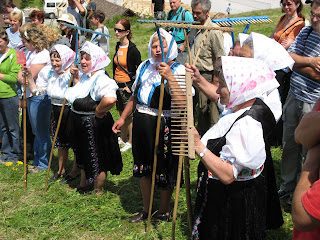 Terchová is a small town with a big role in Slovak folk culture. Found in northern Slovakia a few kilometres east of the city of Žilina, this was the birthplace of the national hero Juraj Jánošík, an early 18th-century Robin Hood figure who stole from the rich landholders and gave to the poor peasants while becoming a symbol of national resistance. Today a statue of Jánošík overlooks the town from a hilltop, while a small museum contains artifacts and details from his life as an outlaw. Several folk festivals of traditional dance and music are held each year in Terchová, as well as many other traditional cultural events. One of my favourites is the annual high-speed hay cutting championships held in late June. Competitors race to cut a patch of long grass in a field using a scythe in the traditional manner. There are individual time trials for male and female competitors, as well as team events where groups of five must cut larger areas of a field in the fastest possible time. Spectators sing folk songs about working in the fields to encourage the contestants, and they follow the action intensely, since bragging rights for an entire year are on the line. The competitors are mostly locals from Terchová and the surrounding villages plus a few Slovaks from other regions of the country. At the end of each round, the competitors are rewarded for their efforts with a shot of plum brandy and a team of older women dressed in traditional costumes comes out to clean up the freshly cut grass with rakes. An awards ceremony follows at the end of the day with prizes for the winners in each category, while everyone enjoys plates of goulash cooked in a giant kettle over a fire. This is a wonderfully unique event and a great cultural experience to enjoy.

Terchová is easily reached by bus from the city of Žilina, which is on the main train line running through the country with frequent connections to Bratislava and Košice as well as several trains daily to Prague. There are a number of small hotels in Terchová and lots of guesthouses, I've stayed at the Penzion Furmanec several times, but there are many more, including the Penzion Goral, Penzion Terchová, and Penzion Montana.
Posted by Goulash Train at 1:56 PM