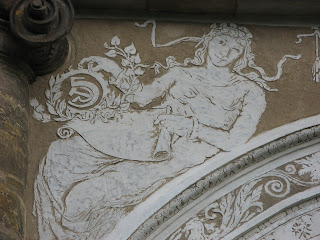 In the Royal Garden next to Prague Castle, not far from the Royal Summer Residence, you will find the Royal Ball Game Hall. This building dates from the 16th century and was used by the king's courtiers for sporting activities. The structure was damaged by fire in May 1945 during the last stages of World War Two, but it was fully rebuilt in the 1950's. Along with the many mythological deities that were carefully restored on the facade, a small addition was made that remains as a quirky reminder of the communist period. A figure unfurling a scroll meant to be a five-year plan with a hammer and sickle was included in the design, together with the letters 'ČSR', for Czechoslovak Socialist Republic. This is a detail that you have to look closely to find (it's along the top row of the facade near the roof), so be sure to stop and take a closer look if you are visiting Prague Castle.
Posted by Goulash Train at 1:51 PM